Film / Mark of the Vampire 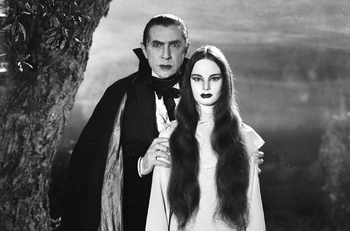 Mark of the Vampire is a 1935 horror film directed by Tod Browning, starring Lionel Barrymore and Bela Lugosi.

The setting is Prague during 1934. Irena Borotyn and her fiance Fedor have returned home to her family estate, so they can be married. Unfortunately, soon after their arrival, Irena's father Sir Karell is found murdered, with two puncture wounds on his neck and with his body completely drained of blood. The local Agent Mulder doctor immediately diagnoses a vampire attack, and the townspeople blame one "Count Mora" (Lugosi), believed to be the local vampire, and his vampire daughter Luna. The wedding is postponed, and Irena goes to live with her guardian, her late father's close friend Baron Otto (Jean Hersholt).

A year passes, and once again it's time for Irena and Fedor to get married. Unfortunately, Fedor is attacked by a vampire, and Irena is attacked by Count Mora's daughter Luna. The good guys call in Professor Zelen, an expert on vampire lore (Barrymore), who tells them that Mora and Luna must be destroyed during daylight hours. But the vampire duo aren't going to go away so easily...and in the meantime, Sir Karell's coffin is empty...

With Mark of the Vampire, MGM pointedly capitalized on the vampire craze started by Dracula. It is a remake of London After Midnight and the salience here is that all three movies were directed by Tod Browning. Mark of the Vampire is one of his final movies following the backlash to Freaks. Bela Lugosi, of course, plays the main vampire.