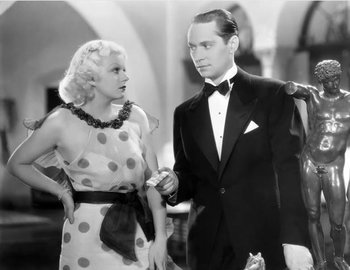 Harlow is Lola Burns, a glamorous blonde bombshell Hollywood movie star. Her complicated life involves a temperamental Latin Lover who has overstayed his visa, a crazy fan that won't stop stalking her, a father and brother who are mooching off of her, and studio publicity man E.J. "Space" Hanlon (Tracy), who keeps embarrassing her with the fake scandals he gins up to keep her name in the papers. Space once dated Lola and still carries a torch for her, but he doesn't let that stop the studio publicity machine. When Lola falls in love with aristocrat Gifford Middleton (Franchot Tone) and elects to retire from pictures, Space has to lure her back, both for himself and the studio.