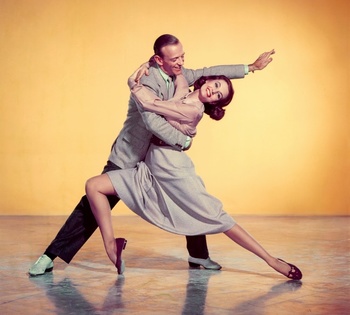 The 1957 Musical remake of Metro-Goldwyn-Mayer's 1935 Romantic Comedy Ninotchka, directed by Rouben Mamoulian and starring Fred Astaire, Cyd Charisse and Peter Lorre. It was based on a 1954 stage show with music by Cole Porter.

An American movie producer, Steve Canfield (Astaire), wants Russian composer Peter Boroff to write the music for his next movie. The composer decides to stay in Paris, but three Russian operatives, Comrades Brankov (Lorre), Bibinski and Ivanov are sent from Moscow to take Boroff back. Following Canfield's successful corruption of these three with western luxuries, Nina "Ninotchka" Yoschenko (Charisse), an Ice Queen displomat, is sent to bring all four men back home...