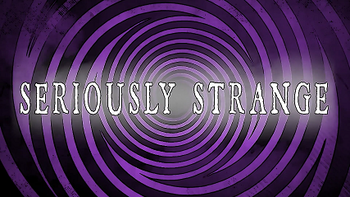 "In our world, much has been explained. But that's only what's on the surface. Within the shadows of our knowledge exists another world, a darker world - one that is home to the unbelievable, the unthinkable, the unexplainable. It's here we feed our darkest curiosities. Anything is possible in this world, a world so Seriously Strange."

Seriously Strange is an online horror series created and hosted by Rob Gavagan (formerly Rob Dyke). He tells stories of the deathly, mentally unstable, and all-around unsettling. Sporting a perpetual Kubrick Stare and a mesmerizing voice, he tells of a string of happenings all under one topic, more often than not having to do with death. He doesn't sugarcoat anything on the show (besides, perhaps, blurring out extremely disturbing images), nor do the show's artists, who can make some pretty horrifically detailed drawings.

The series and its subseries are:

The original show and its spinoffs can be viewed here