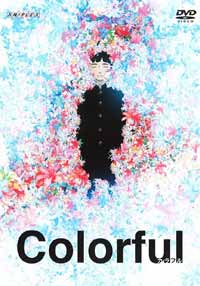 Colorful is a 2010 Japanese animated feature film directed by Keiichi Hara. It is based on the novel of the same name written by Eto Mori, produced by Sunrise and animated by the animation studio Ascension.

Upon reaching the train station to death, a dejected soul known only as "I" is informed that he is 'lucky' and will have another chance at life. He is placed in the body of a 14-year-old boy named Makoto Kobayashi, who has just committed suicide. Watched over by a neutral spirit named Purapura, the soul must figure out what his greatest sin and mistake in his former life was before his time limit in Makoto's body runs out. He also has a number of other lesser duties he must complete, such as understanding what led Makoto to commit suicide in the first place and learning how to enjoy his second chance at life.

Not to be mistaken for the manga and anime series Colorful.