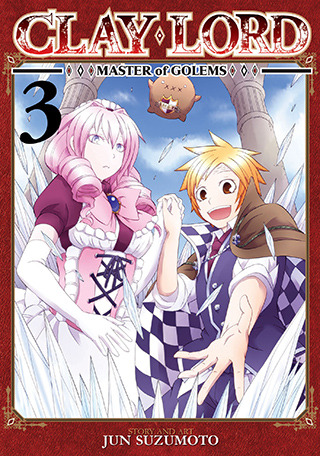 Clay Lord takes place in a world in which craftsman can bring stone creatures to life as Golems. Golems are used for many different purposes, for everything from military applications to construction. Amongst the many families of Golem Craftsman, the Earthgaia family stands above all else. Their previous patriarchs, the Twin Crowns, were said to be the greatest Golem Crafters in all of the land, until they vanished six years ago...

Now the only remaining member of the Earthgaia family is the famous twins' little brother, Clay Earthgaia. While his golems seem weak at first, he definitely lives up to the notoriety that comes with being an Earthgaia: he's managed many prodigious feats of craftsmanship—creating a completely new type of golem from scratch amongst them. He's followed by his three servants, Kurogane, Shirogane, and Roze, three impossibly human golems left behind by his brothers. Life is not all fun and games for Clay, however, for as a member of the Earthgaia clan, his blood is worth more than gold to more unsavory Craftsmen and dealers...