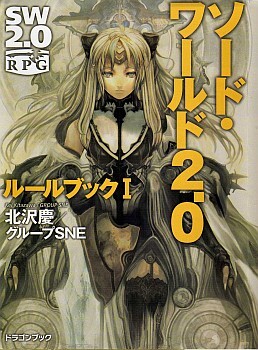 The cover of the 2.5 edition of Sword World RPG.
Sword World RPG is a Tabletop RPG created and published by Group SNE . It is one of the most popular fantasy tabletop games in Japan, having sold over 10 million copies of its rulebooks, Light Novels, and replays.
Advertisement:

Sword World has had multiple editions, the first of which was published in 1989; the system was originally intended to be an RPG supplement to the popular replays of Record of Lodoss War. Initially, the setting was a world called Forcelia, which implemented both Lodoss Island from the previously mentioned Lodoss and the continent of Crystania from Legend Of Crystania.

The second edition of Sword World was published in 2008, with a revised 2.5 edition in 2012; it updated the setting to the world of Raxia and introduced several new races to the game system.