The cast of Nine Hours, Nine Persons, Nine Doors, and all tropes that pertain to them. For tropes specific to their appearances in later games, see their respective character pages.

Beware for Late-Arrival Spoiler descriptions for later games in the franchise.

Major spoilers ahead. All spoilers are unmarked. You Have Been Warned.

"Do any of you know what the fuck is going on here?! Who's Zero?! What's this 'Nonary Game'!? C'mon! Anybody? Anything?! What the hell is going on?! What are we doing here?!"

The protagonist of the game. Junpei is an ordinary college student who is kidnapped by a mysterious masked man and wakes up in an unknown location with a bracelet strapped to his wrist. Although he is confused and frightened at first, after adjusting to the situation it is shown that he has a sharp mind and a skeptical outlook on life.

His bracelet number is 5. Unlike the other eight, he does not have a codename because his real name was revealed before the group decided to keep them a secret.

"What are you going to gain by being so suspicious? That's what Zero wants, you know. This game was set up by Zero, wasn't it? Any game has a winner and loser. Whoever makes it through door [9] is a winner, and those who don't are the losers. Zero is trying to make us fight against one another for that victory. That is why we can't let ourselves fall prey to suspicion. We have to trust one another, and form a strong bond of friendship. Otherwise, we'll end up ensnared by Zero's manipulations."

An older man with a goatee and graying hair. He generally serves as a voice of calmness and reason in the midst of the terror going on in the ship. His bracelet number is 1, and his name comes from playing cards.

His original Japanese alias was "Ichimiya" (from the word for "one").

His true identity is Gentarou Hongou, the CEO of a pharmaceutical company that (re)created the Nonary Game nine years ago as an experiment in morphogenetic fields. He and three others kidnapped eighteen children (nine pairs of siblings) and placed nine children on the Gigantic, and the other nine children in "Building Q", a replica of the Gigantic built in Nevada. After the initial game, he laid low for a while until the present day, where he is kidnapped by Zero and forced to play the game he recreated.

"I am shocked and appalled that guessing at random has not yielded better results."

A thin, elegant man dressed in a regal fashion. He is blind, but is quite capable of getting around easily enough. Clover is his sister, and his bracelet number is 2. His name comes from the expression "Snake Eyes", a term in the dice game craps that signifies 2.

His original Japanese alias was "Niels", using the pronunciation of "two" and the name of a favorite physicist, presumably Niels Bohr

He was one of the eighteen children who participated in the Nonary Game nine years ago. As a result, he knows a great deal about the game, but because Zero has threatened to kill Clover if he says anything about it, he keeps his mouth shut. 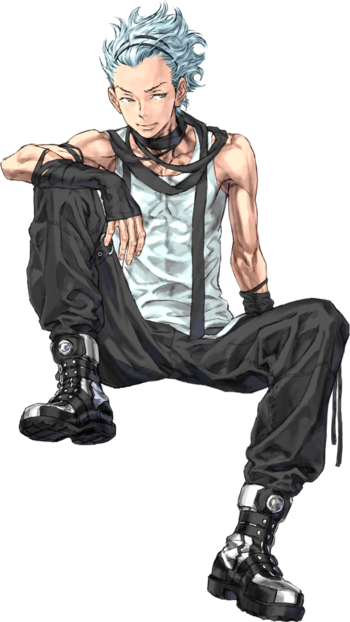 Didn't I tell you? I'm Santa Claus. It's time for me to go make a wish come true.

Santa, like Snake, is 24, and is quickly defined by his outspokenness and tendency to swear, matching his somewhat punk attire. While he often provides some amount of Plucky Comic Relief, he also shows signs of The Smart Guy and is a particularly helpful team member. Throughout the game, he's determined to keep the players moving and refuses to succumb to helplessness or in-fighting. His bracelet number is 3 and his name is derived from "san", the Japanese word for three, which was unchanged for the English-language version. (In the English version, he asks if any of the other players speak Japanese before announcing his nickname, an acknowledgment to the game's original language.)

He was one of the eighteen children who participated in the Nonary Game nine years ago, along with his sister Akane. Due to an administrative error, both he and Akane were placed in the same testing group instead of being split up as the experiment demanded. He is fully aware of the true purpose of the second Nonary Game, having collaborated with Akane to perfectly recreate the vision that she saw in the closing moments of the first Nonary Game, and to take revenge on the people who put them through the Nonary Game to begin with. His real bracelet number is 9, or 3+3+3 (three threes), which may be a symbol of the multiple roles he's playing during the game. Word of God states that when Junpei hears Zero's voice, Santa is using his psychic powers to communicate with him directly. During the first Nonary Game, he is depicted as having leadership qualities and is saved by Seven, along with Snake. Snake mistakes Santa for Zero during the True Ending, but believes that Santa isn't dangerous or intent on killing them. 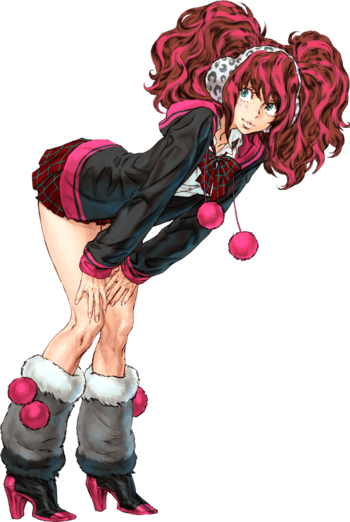 "I would'a thought a guy your size would have bigger balls than that."

A cheerful girl prone to rapid swings of emotion. She is Snake's sister and her bracelet number is 4. Her name comes from the number of leaves on a Four-Leaf Clover.

"I'm not really Zero. Not yet. Perhaps you could say I am... less than Zero."

An old friend of Junpei's from elementary school. She's always helpful and works hard to make sure no one is left behind, although she is occasionally prone to feverish spells. Her bracelet number is 6, and her name comes from the sixth month of the year.

Her original Japanese alias was "Murasaki", from the word for "six". The word's literal meaning of "purple" also applies to her clothing, her eye color, and certain other aspects of the game. As later suggested by the real name and bracelet number of "Cap", the mu syllable can be interpreted either as "six" or "nothingness".

She was one of the children who participated in the Nonary Game nine years ago. At the climax of her Nonary Game, Akane became psychically linked with present-day Junpei and witnessed him play the second Nonary Game. Furthermore, Akane has a unique power that let her perceive every possible variation of events in the second Nonary Game, and transmit this information to Junpei to help him out.

This psychic link would save her life, as present-day Junpei would help her solve a puzzle that freed her from the last lethal trap of her Nonary Game. However, this chain of events caused a Temporal Paradox: if the events that she had foreseen did not occur, then Junpei would never be in a position to become psychically linked with her past self and thus save her life. And so, Akane schemed with her brother Aoi to recreate the events she had foreseen in the past, masterminding the second Nonary Game to safeguard her own life while also taking revenge on those who put her through that ordeal in the first place. 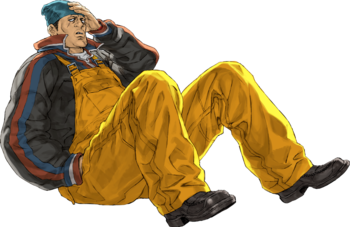 A towering mountain of a man wearing a beanie and suffering from amnesia. Despite his bumbling nature, he is very dependable and well-equipped for solving problems. His bracelet number is 7. His name comes from... the number seven.

His original Japanese alias is also the English word "Seven".

He is a detective that searched for the missing children that were forced into the Nonary Game nine years ago. He was caught and locked in a cell in the Gigantic, but managed to escape and also save many of the children in the process. After these events, he attempted to track down the mastermind Gentarou Hongou to bring him to justice, but never found him.

He claims that he was unable to save Akane, and that she was the only child to die in the original Nonary Game. However, this contradicts the chain of events that led up to the creation of the second Nonary Game. Considering that he is one of the only eye-witnesses to the events of the first Nonary Game, it is very likely (but not confirmed) that he is either collaborating with Zero, or that Akane tampered with his memories using her Esper powers. 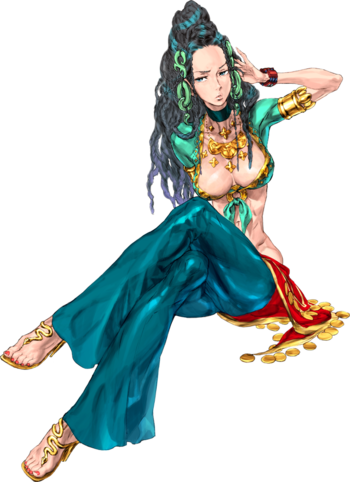 "Junpei, are you just screwing around?"

An older woman dressed as a belly dancer. She has an abrasive and aloof personality, and tends to act only towards her own self-interests. Her bracelet number is 8, and her name comes from the number of petals on a lotus.

She is an incredibly intelligent computer hacker, working as a digital security consultant, who only dresses like a belly dancer because she likes the fashion. She has two daughters, both of whom were involved in the first Nonary Game.

Her original Japanese alias was Yashiro, from the word for "eight".

A jittery and nervous man with glasses who seems to know more than he should. His bracelet number is 9. Although written with different kanji, the first syllable of his family name is a homonym of the word for "nine".

His true identity is Teruaki Kubota, one of the four men responsible for the first Nonary Game nine years ago. While Gentarou Hongou was the mastermind behind the project, Kubota was the one who designed the technology used in the Nonary Game. With that in mind, he attempts to break away from the group to escape on his own after Hongou (as Ace) tricks him into believing that the DEADs were changed so that only one person had to verify them. He dies soon after, and his death immediately serves as a lesson on how deadly the game truly is.

Others - WARNING: Unmarked spoilers ahead! 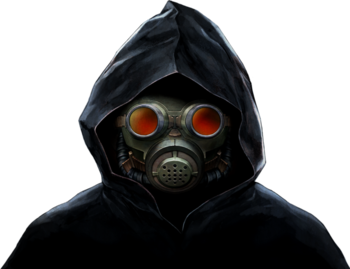 The mastermind of the Nonary game, who kidnaps the players to force them to participate. Can be heard over the speakers. 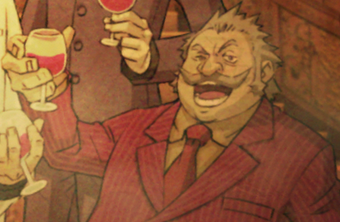 Not actually the captain, but a man dressed as one. His true identity is Kagechika Musashidou, one of the four men responsible for the first Nonary Game nine years ago. He was the one who financed the Nonary Project. Hongou was given a note in which he was asked to confess, and be released. Musashidou was brought in as a witness, although this was just a Batman Gambit by Akane to have him killed off by Hongou.

His true identity is Nagisa Nijisaki, one of the four men responsible for the first Nonary Game nine years ago. He was the second-in-charge of the Nonary Project. He is killed by Hongou, mistaking him for Light. This was orchestrated by Akane, who swapped his clothing with Snake's. 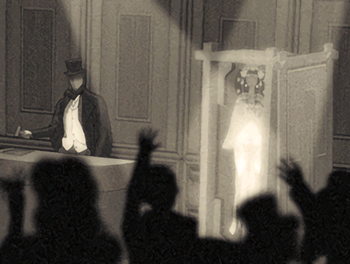 The creator of the original Nonary Games. An English eccentric millionaire, he was a survivor of the Titanic's submersion and later obsessively attempted to purchase everything related to the Titanic. He purchased All-Ice and the Gigantic (after its incident in WWI). He is the creator of the original Nonary Game- he would take young Englishmen who'd accumulated massive debts and force them to play Nonary Games on the ship, and he would enjoy the show with his millionaire friends as they bet money on who would survive. All the losers were burned in the incinerator as a sacrifice during a ceremony (which the robes Snake woke up in were used for.) After many years of this, Gordain died of old age, but the games were continued by his successors. Ironically, Ace was kidnapped during the last game.