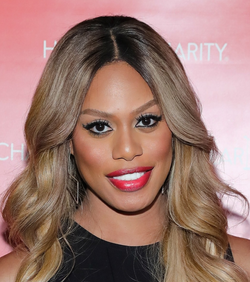 Laverne Cox (born May 29, 1972 in Mobile, Alabama) is an American actress from Mobile, Alabama. She got her break on reality TV before being cast as Sophia on Orange Is the New Black, a role that catapulted her into the public eye. Like Sophia, Cox is a trans woman, and is an LGBTQ+ advocate widely seen as a trailblazer for trans people. In addition to Orange, Cox has appeared on shows like The Mindy Project and Doubt, and played Dr. Frank-N-Furter in the 2016 television film remake of The Rocky Horror Picture Show, The Rocky Horror Picture Show: Let's Do the Time Warp Again.