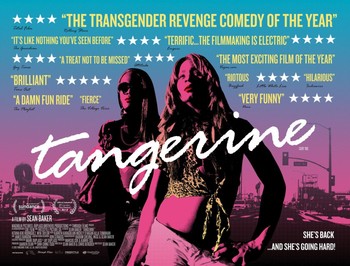 Tangerine is a 2015 independent dramedy film directed by Sean Baker and starring breakout actresses Kitana Kiki Rodriguez and Mya Taylor. The film was critically acclaimed primarily for its portrayal of its two transgender leads in a manner that did not delve too deeply into their identity while still affording them due respect. Historically, Tangerine is notable for providing the film for the first Academy Award campaign for an openly transgender actress supported by a film producer, and for having been shot entirely on an iPhone.
Advertisement:

Transgender sex worker Sin-Dee Rella, who has just finished a 28-day prison sentence, meets her friend Alexandra, another trans sex worker, at a donut shop in Hollywood on Christmas Eve. Alexandra accidentally reveals that Sin-Dee's boyfriend and pimp Chester has been cheating on her with a cisgender woman. Sin-Dee storms out to search the neighborhood for Chester and the woman.

Not to be confused with the 2013 Estonian film Tangerines. Or a 1997 novel of the same name.