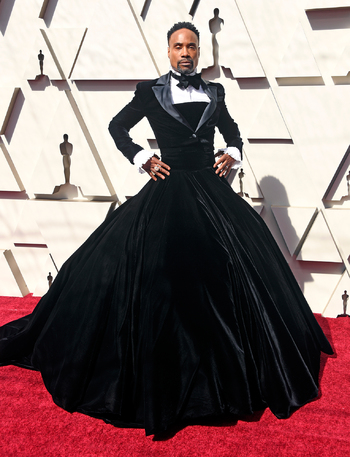 "My goal is to be a walking piece of political art every time I show up. To challenge expectations. What is masculinity? What does that mean? Women show up every day in pants, but the minute a man wears a dress, the seas part."
Advertisement:

Billy Porter (born September 21, 1969) is an American actor, singer and performer. He started his acting career on Broadway in The '90s, becoming well-known for performing and writing. In 2013, he landed the role of Lola in the first Broadway run of Kinky Boots (based on the film), which was his breakout into further stardom as well as earning him a Tony award. He acted on stage and in film and television regularly before landing a lead role in Pose as Pray Tell, which earned him an Emmy award in 2019 for Outstanding Lead Actor in a Drama Series, and the distinction of being the first openly gay black man to win any leading acting award in Emmy history.

Also known for his flamboyant Camp Gay personality and penchant for wearing luxurious outfits and dresses at social functions.

In 2021, he revealed that he is HIV-positive, one of the few well-known figures in the entertainment industry to reveal such a diagnosis.