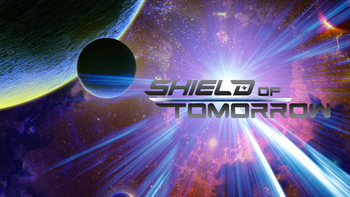 Shield of Tomorrow is a tabletop gaming-based web series hosted by Geek & Sundry. It is a Star Trek RPG starting approximately around late-Season 3 of Deep Space Nine.

The story focuses on the bridge crew of the U.S.S. Sally Ride, an Intrepid Class Starship designed for deep space exploration and scientific discovery. The story deals with the impact of the battle of Wolf 359 on Starfleet as well as the looming threat the Dominion poses, and the general unease and apprehension of the universe as all these events cloud around them without many answers.

The Bridge Crew is made up of the following:

And Eric C. Campbell as our GM. The show was on Geek and Sundry’s Twitch channel every Friday at 4:00pm PST.