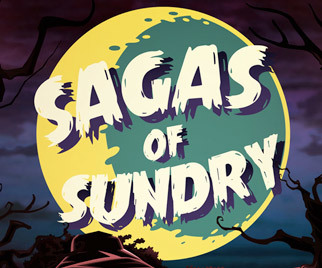 Sagas of Sundry is a horror tabletop gaming-based web series hosted by Geek & Sundry on their Project Alpha channel. What began as a one-shot published by "Geek and Sundry" for their International Tabletop Day 2017 stream is now a full show, picking up where the events of the previous one-shot left off. The show uses the RPG system of Dread, a horror-based role-playing system where major actions are accomplished or failed by pulling a giant block from a Jenga tower. Should it fall, you fail.

The first series follows five friends who come together one year after a horrifying summer camping trip changed their lives forever. They come together in the same spot as last year to prove their own beliefs about what happened last year. But it seems something is still amiss at the spot where they all met last.

The second series, Sagas of Sundrey: Madness, is unrelated to the first but uses the same system and is similarly horror-based, this time set in a creepy apartment complex.

The Dread cast is as follows:

The Madness cast is as follows:

Season One provides examples of: