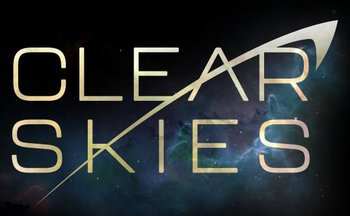 Clear Skies is a 2020 tabletop RPG live play show of Star Trek Adventures. The show is a Spiritual Successor to Shield of Tomorrow, retaining a good number of the cast, but is unconnected to it.

The story takes place several years after Star Trek: Voyager and follows the crew of the U.S.S. Mary G. Ross

, a Galaxy-class variant designed for technological research and diplomacy, exploring the Shackleton Expanse as the Federation tries to rediscover its identity after years of war.

The show is hosted by QueueTimes

, and airs on their Twitch channel every Monday at 6:30pm PT, with VOD available on YouTube the following Thursday.

The Crew is made up of the following: