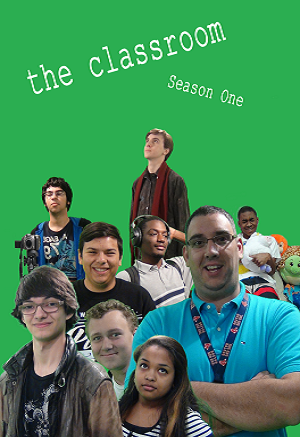 What a Rag Tag Bunch Of Misfits...

The Classroom is a class project/webseries, and Affectionate Parody of The Office. Set in the titular classroom of West Florida High School, in a Senior Multimedia class, whose focus is school news and video projects, the show follows the wacky hijinks of the class's students. Led by a lazy and apathetic teacher, Mr. Justin Luciano, the students must deal with rivalries among each other, demands of the greater school area, and other mayhem and mischief.

Being a class project, it should be noted the show's target audience were the students and staff of the school in which it is set, but that doesn't stop one from enjoying the show, as it's easy enough to follow without much prior knowledge. The Classroom follows its source material's mockumentary style, and takes more than a few pages out of its book when it comes to characters and style. The series lasted seven episodes throughout 2014, until the starring class graduated. It ended inconclusively, with other episodes being planned and written, but left unfinished.

The first official episode (discounting the unofficial pilot), can be found: here

The unofficial pilot (which is considered non-canon and is a Random Events Plot lacking the current series' tone and style can be watched here: here

The Classroom contains examples of: