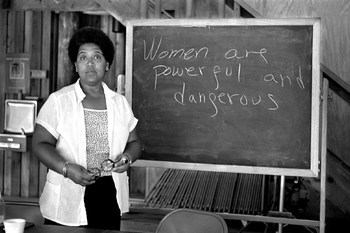 Audre Lorde (February 18, 1934 – November 17, 1992) was an American poet, writer, and activist. She self-described herself as "Black, lesbian, mother, warrior, poet," and used her poetry and writings to address injustice, racism, classism and homophobia as well African-American womanhood. Her most famous work was Sister Outsider: Essays and Speeches, a collection of essays and writings, which has become a staple in Black and Queer studies.