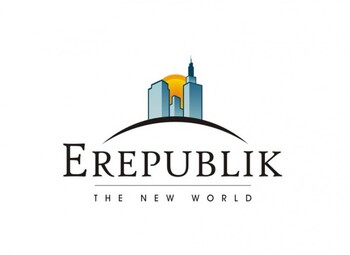 "A new world is emerging. Your country needs YOU!"
—Taken from the main website
Advertisement:

bills itself as the "first massive online social strategy game" and what it is is best thought of as the result of a drunken night between Facebook, World of Warcraft, Risk, and a college economics class. Players are citizens of a country, where they can vote in elections, work at companies, buy products, starve if they don't eat food, write newspaper articles, move to other countries (but not vote unless they gain citizenship), and fight in battles.

The Facebook aspect comes in as citizens can post "shouts" (in 140 characters or less) and declare other citizens "friends".

The World of Warcraft aspect comes from the way users level up different skills, such as Strength (which relates to how much damage you do at war) and something job related (e.g. Manufacturing relates to how effectively you can turn raw materials into manufactured goods).

The Risk part comes in with the absurdly complex war fighting component. Countries are made of regions, and countries that share a border can invade each other. That process is the simple part. The president of a country (elected by majority vote among candidates picked by the party presidents of the 5 largest political parties by membership) declares a war, which must be approved by the congress (also elected, but on a per-region basis with a certain number of wild cards). Once approved, the president can attack a region of the country he declared war on, and the battle is fought individually by citizens with each citizen doing damage. (Wait, that's not simple at all!) And this doesn't get into the even more complex issues involving resistance wars, mutual protection pacts, or initiative.

The college economics class aspect comes from the even more complex economic system where people work at player owned companies to create goods. Inflation, income taxes, VAT, import duties, trade embargoes, natural resources, and currency exchange rates all play a part. Add to that the fact that money is constantly being removed from circulation to pay for various in-game bonuses, and things get even more complex.

But don't let that scare you off! Plenty of players get by just doing next to nothing (these are called "two-clickers

"). Thus, you can actually spend a lot of your time just lolly-gagging around and hanging out, with no Munchkining necessary. Or fluctuate wildly between the two extremes.