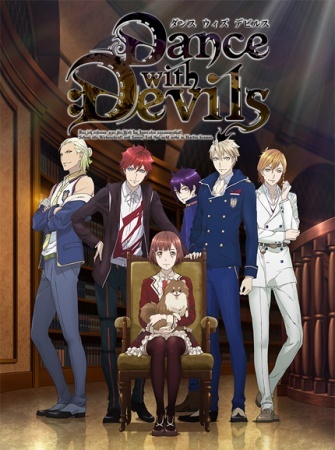 Ritsuka Tachibana becomes entangled in a conflict between devils and vampires at her school. Both sides believe she is the last remaining key to discovering the location of the "Forbidden Grimoire", a powerful book of magic that will give whoever obtains it mastery over the world.

The series is unusual for the fact that it is essentially an animated musical, featuring at least one song per episode, sung by the characters in the show.

Dance with Devils is a multimedia project conceived by Rejet and Elements Garden, which started as an anime series that was part of the Fall 2015 Anime season.

The multimedia project also counts with a manga (Dance with Devils -Blight-, written and illustrated by Samako Natsu, which focuses on Ritsuka and Shiki's relationship), 3 stage plays, a PlayStation Vita otome game (released on March 25, 2016, later announced for a Nintendo Switch port to be released on April 28, 2022), and some drama CD series (EverSweet, Charming Book, and Twinlead).

In June 2017, a movie based on the anime series, Dance with Devils -Fortuna- was announced, with the movie itself premiering on November 4 the same year. The movie's premise is an alternative retelling of the anime series with a number of key differences such as new songs, different epilogues depending on the cinema that shows it and a new character; Marius, voiced by Toshiyuki Toyonaga, who serves as the movie's narrator and has an implied connection to Ritsuka and Roen.