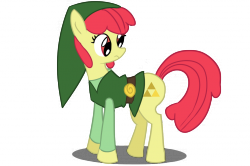 is a My Little Pony: Friendship Is Magic story by Moowell.

After an experiment trying to get inter-dimensional connectivity, Apple Bloom becomes a new hero holding the Triforce of Courage. This is her adventure.

Part 1 is complete and divided in the following arcs:

Birth of a Hero

Part 2 is in progress and has the following arcs:

Tropes featured in this story: