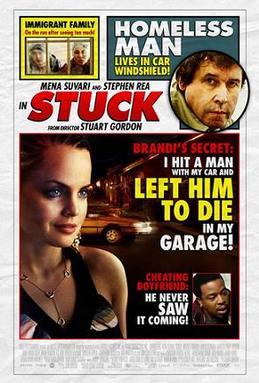 The theatrical poster should be enough to tell you what you're getting yourself into.
Advertisement:

Stuck is a 2007 Black Comedy thriller film directed by Stuart Gordon (of Re-Animator fame). The film's plot was inspired by the true story of the murder of Gregory Glenn Biggs

and sadly it was the final film Gordon directed before his death.

Tom Bardo (Stephen Rea) is having a bad day. He's just been evicted from his apartment, had his unemployment checks discontinued, and gotten screwed out of his job interview by Obstructive Bureaucrats. Now homeless, he is forced to go on foot to a homeless shelter far away by a Jerkass cop.

Meanwhile, retirement home nurse Brandi Boski (Mena Suvari) is having a good day. Her hard work at the home has put her up for a promotion, and she celebrates with her drug dealing boyfriend Rashid (Russell Hornsby) by partying, getting drunk, and getting high. While driving home, Brandi crashes into Tom. Though she initially decides to get Tom help, she becomes afraid of being arrested and instead drives home and leaves him in her garage to slowly die, hoping the problem will take care of itself. Unfortunately, Tom won’t die that easy...