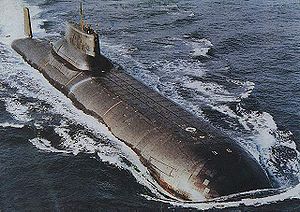 SAMs, torpedoes, Mnogo Nukes, no wonder it's such a Cool Boat.

The Soviet Union were really into their ballistic missile carrying submarines. Their "second strike" doctrine required launch platforms that could stay undetected for long periods of time until they could launch their missiles at the USA, just as it was starting to get back on its feet after an initial exchange.

Early Soviet missile subs were limited in missile range, forcing their deployment close to the US coast, which was potentially very dangerous in a war- for the crews, as the subs were also considerably noisier than Western ones.

The basic thinking behind all this seems to have been that having an actually deployed system was better for scaring the West than one that was military effective- or even safe (the "Hotel" class is a particular case in point).

The Soviets developed longer range missiles for the "Delta"-class and then changed to a "bastion" strategy, keeping their subs close to the Soviet Union, supported by surface ships, aircraft and other subs.

"Boomer" is a US slang term for a ballistic missile submarine, which we will use here. Reporting Names are in speech marks.

In a mistake repeated in more than one pre-1989 techno-thriller, the Soviet Navy did not name its submarines, instead relying on an acronym for the size type (TK = "heavy cruiser", B = "Large" for example) followed by its service number.

"We all live on a Workers' Submarine"- Soviet Conventionally-Powered Boomers

As with the US, the Soviet Union started off with conventionally powered missile submarines. They could manage an uncontrolled nuclear reaction, but not a controlled one- yet.

The first Soviet submarines to carry ballistic missiles (in fact the first such subs in the world), being converted from attack submarines. The Project 611 design was based on the German Type XXI U-boat

. The design was revolutionary, allowing subs high speed underwater and would have influenced the outcome of the Second World War had it entered service earlier.

"Carried" (it was rarely if ever deployed with them on board) two R-11FM missiles, which it had to launch from the surface.

The first dedicated Soviet boomers, although still conventionally-powered. Fitted with a system that updated current position and launch settings automatically, reducing launch time to 72 minutes, needing to surface for only 12.

23 were built in all, with six variants. The first three carried the R-11FM, but the later ones had R-13/SS-N-4 missiles. 14 were later refitted for the R-21/SS-N-5, which could be launched underwater. Three were converted, each to different variants, for testing of later missiles.

Noisier than was practical for a nuclear deterrent force, many of these ended up in the Baltic Fleet, where they could be better protected. Nevertheless, they had an excellent safety record, something practically unheard of in the Red Fleet, and were kept in service until the late 80s.

All were out of service by 1990 and some were sold for scrap purposes to North Korea.

The plans were sold to China in 1959 and one may still be in PRC service.

Sunk in mysterious circumstances off Hawaii in 1968, with the loss of all on board. A search by the Soviet Pacific Fleet seemed to have no idea where K-129 might be, when ballistic missile subs were required to report their position at regular intervals. A US spy satellite briefly detected the infrared signature of Soviet ballistic missile fuel burning near her wreck's final location (which remains classified). It appears to have imploded after going below crush depth. Was then, with help from Howard Hughes partially or fully raised by the Glomar Explorer, the deepest salvage operation of all time.

The CIA "refuse to confirm or deny" whether they have any documents on this raising, the location remains classified, as does what they recovered. A Conspiracy Theory claims that K-129 exploded while trying to nuke Hawaii. This is supported by some very strange activity surrounding the boat before she put to seanote The boat was ordered back on patrol in the middle of her usual rest and refit cycle, and had taken aboard about 10-15 more people than was normal for her final voyage; speculation goes that these were KGB men under order from hard-liners to take over the boat and launch a nuclear missile at Hawaii in a False Flag Operation intended to cause a nuclear exchange between China and the US, her failure to make scheduled position reports, and the US Government returning some items to post-Soviet Russia that could not have been recovered from the small section that was supposedly raised.

The first SSBN class in Soviet service, i.e. nuclear-powered. Generally similar to the "Golf," but with two reactors in place of the Diesel engines, and a horrible safety record. The missiles were initially the R-13/SS-N-4 "Sark", but were later replaced with R-21/SS-N-5 "Serb". They had to surface to fire the first type of missiles.

The most notorious is K19 "The Widowmaker", which had two reactor accidents, both causing fatalities. It was the focus of a Hollywood film, which was full of Lzherusskie. Note that "The Widowmaker" name was a Hollywood invention. The real boat was nicknamed "Hiroshima".

The first modern SSBN in Soviet service, apparently based on plans for American subs covertly obtained by the GRU. Carried either for R-27/SS-N-6 "Serb" ("Yankee I") or the R-31/SS-N-17 "Snipe" ("Yankee II"- just one converted from a "Yankee I"). There was never a Snipe Hunt. Role appears to have been destruction of time-sensitive targets, such as Strategic Air Command bomber bases. The "Yankees" had to get rather close to the American coast (Bermuda area specifically) and probably would have been taken out by American subs before they could launch. Because of this, a number might have been switched in mission for European targets, allowing them to stay in "sanctuary areas" nearer the USSR. All now removed from service.

K-219, commanded by Captain Igor Britanov, suffered a catastrophic accidental fire in her missile compartment on October 3, 1986 while maneuvering close to the fast-attack submarine USS Augusta (SSN-710) north of Bermudanote  The Russians initially blamed the fire on a collision with Augusta. It was later proven accidental, but the American boat did collide with another Soviet sub, either K-279 or K-457, a week later. This collision, and his crew's report of his reckless actions during the K-219 incident, ended the career of Captain James Von Suskil. Several men were killed outright, and the fire soon spread to the engineering spaces, with the intense heat damaging the controls for both reactors. Seaman Sergei Preminin entered the reactor compartment in temperatures exceeding 150 degrees Farenheit and hand-cranked the control rods into place, preventing a meltdown that would've killed millions on the US east coast, but was unable to escape. With his boat now a deathtrap and Moscow giving unrealistic orders that would get his crew killed, Captain Britanov ordered K-219 abandoned and scuttled her himself. Seaman Preminin was posthumously declared a Hero of the Soviet Union.

The class also had some other conversions, which are described elsewhere.

A major problem of the Red Fleet's earlier boomers is that they had to get close to the American coast to actually hit anything far inland. That meant getting through the American Navy, which was not easy since the subs weren't all that quiet. This changed with the "Delta I". Its R-29/SS-N-8 "Sawfly" missiles had a range of 4,846 miles (7,800 km), which meant that the boomers could stay in friendly waters, protected by other subs. In fact, it could even launch its missiles while tied up at a dock in Severomorsk and still hit Washington, DC. "Delta II" subs have a less pronounced "hump".

One of the world's most famous submarines and the biggest type ever built (it has a small swimming pool on board, since it's rather roomy), being twice the width of the US equivalent, the Ohio class (it's twice the width because it's essentially two standard submarine hulls welded together side by side). The R-39/SS-N-20 "Sturgeon" missiles could hit anywhere in the continental US from inside the Arctic Circle. Now more or less retired. Six were built, while the seventh was scrapped while incomplete.

In case the "Typhoon" didn't work, this was built as well. Seven entered service between 1985-91, one now converted to a special forces boat. Sixteen missiles on board. Still in service and recently overhauled.

The most boreing submarine ever. (Not really boring)

The most recent class of missile submarines, the first vessel of the class (Yuri Dolgoruky) was launched in February 2008 and commissioned in January 2013. They replace the "Delta III" and "Typhoon" classes, and carry 16 R-30 Bulava ("Mace")/SS-NX-30 ballistic missiles and 6 RPK-2 Viuga (Blizzard)/SS-N-15 "Starfish" anti-sub cruise missiles launched from torpedo tubes.

Naval version of the "Scud" (see Mnogo Nukes Surface To Air Missiles). The range of these missiles was very low (about 350 miles) requiring them to get very close to the American coastline and would have been very awkward to use, requiring about two to four hours to launch. Live missiles were seldom carried operationally, as the propellants were corrosive. Deployed on the "Zulu V" and the "Golf". It wasn't very good (being more a case of only-thing-available, as everything else was too large) but it was a first step and Makeev, the design bureau, designed other Soviet missiles.

Range of only 600 km (pretty short by any standards) and had to be launched from the surface. Accuracy varies depending on which source you're looking at. Peak deployment around 1962, but gradually phased out after 1964. First Soviet SLBM to use vernier engines, small secondary rocket engines used for fine course correction.

A two-stage, liquid-fuelled missile, capable of carrying a 1 megaton warhead about 2,500 km. Carried on the "Yankees" and could be launched submerged, being held ready for about an hour and under peak conditions launching in a minute (according to Western estimates). Could be described as the Soviet equivalent to Polaris, in a way, except NATO subs were far quieter.

It's been argued by a number of defence commentators that the North Koreans and Iranians have reverse-engineered these missiles for their own use.

The first Soviet SLBM with true intercontinental range (7700 kilometers), it was carried on the "Delta I" class.

Used only on the single "Yankee II" boat, it carried a 500 kt warhead, and had a number of practical new benefits, namely a quieter submerged launch system and solid rocket fuel, safer and longer-lasting the liquid. As it is a unique missile carried on one boat, a number of theories have been floated to justify the missile's existence, from satellite launch to retargeting of carrier battle groups.

The weapon of the "Delta III" boats, the R and RK models were the first multi-warhead SLB Ms in Soviet service, trading off some range from the original R-29. The RL model gains back the range, and then some, by returning to a single warhead.

The largest and heaviest SLBM designed, being twice the size of its American counterpart, the Trident I, it has a range of 8300 km and ten MIRV warheads, allowing them to devastate larger areas and better evade missile defenses. In particular, is much wider than the preceding R-29 series.

Carried by the "Delta IV", it has four warheads and a range of 8300km (5157 miles). Has recently undergone an upgrade to the Sineva model.

Intended for the Borey class and as a retrofit on the "Typhoons", this would have been an improved version of the R-39- had it worked. After three embarrassing launch failures in its first three tests, including one in front of Putin himself, the program was axed.

Replacement for the R-39, this all-Russian missile is known for its troubled developmentnote eight of the twenty-three flight tests haven't worked. In service since January 2013.