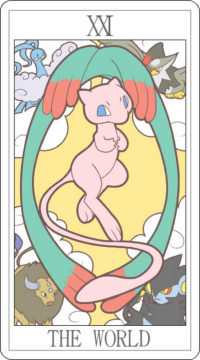 One of the more unusual Derivative Works is an Italian-suited tarot deck based on a piece of fiction. These typically use characters from the fiction with thematically equivalent major arcana, and sometimes replace the minor arcana suits with something from the adapted material.

There are also numerous other decks based on various non-fiction themes.

Note that some media have unique or special tarot decks as a plot element within the story. Those are not examples unless they are defictionalised.

Based On Fiction
Other Themes