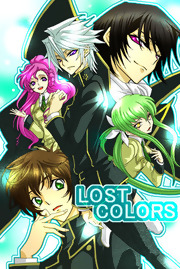 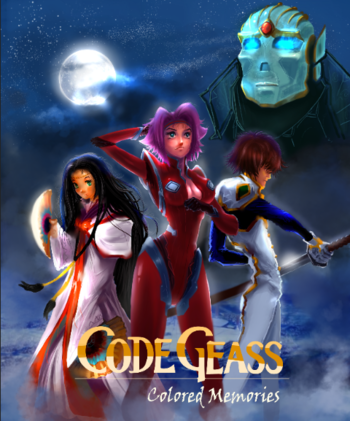 Quite the Colorful picture's eh.
"This person I knew, he too thought that if he just 'follow the rules' as you would say and gain as much power as he possibly could he would be able to protect those who were important to him. All he ever wanted was to lead an ordinary life, live in peace with his family, become a master swordsman like his mother, and who knows, maybe even become a Knight of the Round if he wanted to. But then… things happened and his life became anything but ordinary."
—Rai]
Advertisement:

Like the game that he appears in, Rai lost his memories and ends up unconscious at the gates of Ashford Academy, found and taken in by Milly and Lelouch. Rai sets out on his quest to recover his memories while at the same time deciding how he will affect the battle for Japan.

In 11.05.2015, the author began a rewrite on Fanfiction.Net under the title Code Geass: Colorless Memories Redux. Last updated November 2016, unfortunately. Author gave update in July 2017, but has since not updated. As such, the fic is presumed dead.

Has its own Wikia

page which is open for editing and adds information to the universe that is not stated in the main story i.e. the location of the thought elevators, and the territories of each faction.

It has a sidestory called Code Geass Colored Memories here

It also inspired a Prequel to Colored Memories and Code Geass in general. That is called Roanapur Connection, which uses plot elements and character from both fics in a new fanfic continuity that Crossover with Black Lagoon.

This fic contains examples of the following tropes: