Film / The Other Sister 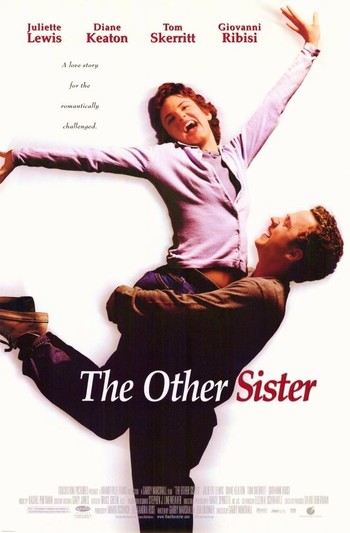 "The Other Sister is shameless in its use of mental retardation as a gimmick, a prop and a plot device. Anyone with any knowledge of retardation is likely to find the film offensive. It treats the characters like cute little performing seals—who always deliver their "retarded" dialogue with perfect timing and an edge of irony and drama. Their zingers slide out with the precision of sitcom punch lines."
— Roger Ebert, summing up the movie.
Advertisement:

The Other Sister is a 1999 film directed by Garry Marshall, about a mentally disabled woman named Carla (Juliette Lewis), who meets and falls in love with a mentally disabled man named Daniel (Giovanni Ribisi), while trying to live independently from her mother (Diane Keaton).

The movie is basically a mixture of a Romantic Comedy and a Dramedy.