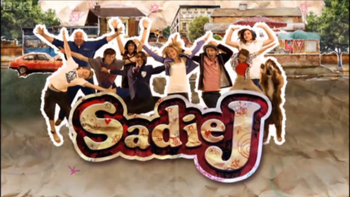 Sadie J is a CBBC television series. The titular protagonist is a 12-year-old girl, sharing a household with male relatives and their closest friends. As the show often reminds you, Sadie Jenkins is the only girl in a boy's world.

Started in 2011 and ended in 2013. Much of the charm of the series is the three plots going on at once and the occasional references to Sadie's Missing Mom.