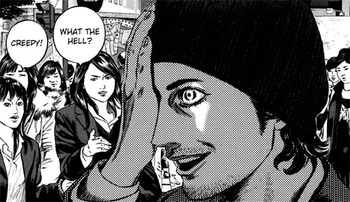 Homunculus is a seinen manga by Hideo Yamamoto, who also authored Ichi the Killer.

So imagine that, like in the Matrix, you have a subconscious self-image. It represents your deepest desires and fears. And no one can see it but you. You, and a homeless man named Susumu Nakoshi, who agreed to let medical student Manabu Itoh drill a hole in his skull for a total of 700,000 yen. Itoh is interested in studying human minds, ESP, ghosts and the occult, and he thinks that he can potentially unleash the hidden psychic potential of Nakoshi's brain.

Nothing seems to be happening, until a few nights after the operation, Nakoshi briefly closes his right eye, and starts seeing nightmare-shapes and monsters everywhere with his left. And then things get weird.

Not to be confused with the little people who live in your brain, or with other uses of the word.