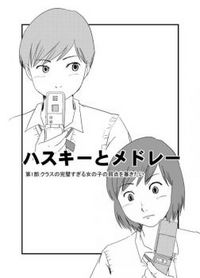 Husky and Medley is a 2009 Yuri romance manga illustrated by pixiv artist Kurosada. The dialogue is almost entirely based on chat logs housed on the Japanese internet forum 2channel, which purportedly chronicles the real life events of the eponymous characters, and making it something of a Distaff Counterpart to Densha Otoko.

The story begins when a female high school student (code-named "Medley") who attends an all-girls school turns to her fellow 2ch anons for advice on how to find the "weak-point" of one of her classmates (code-named "Husky"), who Medley has had a long-standing crush on. On the urging of her compatriots, Medley initiates a somewhat suggestive conversation with Husky via text-message, and eventually builds up the nerve to invite Husky over to her house.

What follows is a chronicle of the girls' budding relationship, with Medley dropping in to update 2ch about their progress and to seek out suggestions on how to take things to the next level.

As of 2019, online profiles claiming to be Medley

indicate the couple is purportedly celebrating ten years together. To celebrate the decade, Medley has begun periodic internet radio shows on YouTube

Husky and Medley contains examples of: