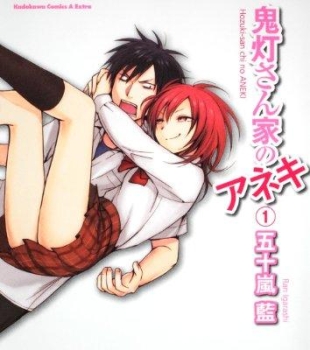 Hozuki-san Chi no Aneki (The Hozuki Brother and Older Sister) is a 4-koma crack comedy by Igarashi Ran, about the wacky day-to-day life and interactions of the Hozuki siblings. It was serialized in Young Ace magazine from 2009 to 2011.

Life for highschool student Hozuki Gorou is anything but easy. His attractive older step-sister Haru aggressively flirts with him, lies to him, and humiliates him in every way she can think of. However, he does have a crush on her, which nonetheless causes even more trouble for him.

A sequel began serialization in the April 2014 issue of Young Ace titled Hozuki-san Chi no Aneki + Imouto, seemingly taking place at the end of Gorou's last year of high school/shortly before college exams. As the title says, Haru's cousin, Aoi, one year younger than Gorou, comes to live with them as their imouto (little sister). The sex is turned up in this series, especially by Aoi.

Hozuki-san Chi no Aneki provides examples of the following tropes: