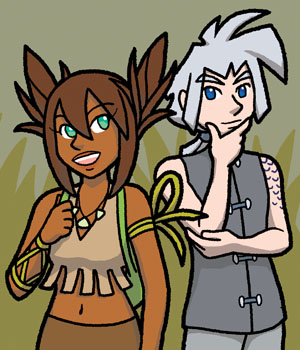 The girl and the ghost.
Advertisement:

) is a Fantasy/Science Fiction webcomic by Diana Stoneman.

In the future, civilization has crumbled, and parts of the world have given way to a strange jungle. This jungle has the strange power to mutate humans into strange anthropomorphic creatures called yahakre. Only natives of the jungle, such as the girl Lae, are immune to this effect.

Since pilgrimages into the jungle are common despite this risk, Lae works as a guide for such pilgrims, regardless of who they are. Yet Lae has a secret of her own - she can see ghosts. Enter Silas, a centuries-old spirit of a young man from the "ancient" civilization. The two, despite some initial problems, quickly forge an unlikely friendship (and maybe something more).

But the politics of the kingdoms outside the jungle intrude with new arrivals, forcing Lae to consider doing something she's never done before - leaving the jungle.