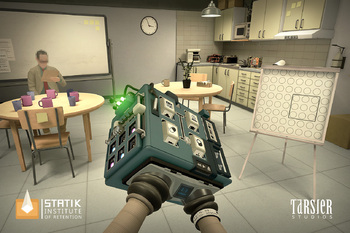 A Puzzle Game for the PlayStation VR system created by Tarsier Studios, Statik presents places the player as a participant in an experiment, their hands locked inside a puzzle box. The player must manipulate the controller's various buttons and two joysticks to figure out how to solve the puzzle, all while being observed by a scientist who offers no help whatsoever.