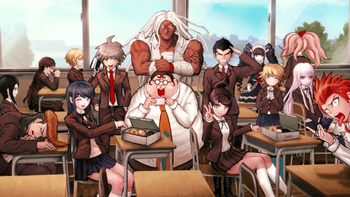 "Basically we got dragon blooded heroes, magic, new students, old students, a prankster that goes too far, romance, action, Junko as a threat, redemption, an artist with mystery super powers, a serial killer who is the second personality of a writer, oddball creatures and super talented students just trying to live life and be happy...what's not to follow?"
— ladymage
Advertisement:

is a Danganronpa Character Blog created by Mod J. It features the students of Hope's Peak Academy running an ask blog as part of a class assignment. Hilarity Ensues. While initially meant to be a prequel and stay canon with the events of the series before The Tragedy, it has since branched off into its own Alternate Universe following Mukuro Ikusaba's Heel–Face Turn. Start from the beginning here

The story reached its conclusion on November 6th, 2016, nearly a year after it began. The story is continued on "Ask The Despair Kids", which can be found from the begining here

Expect many spoilers for the entire Danganronpa series.