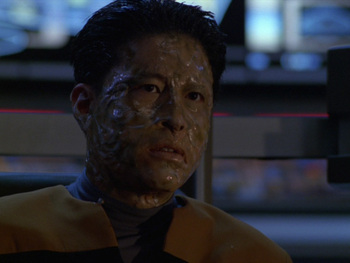 The story starts with Lt. Tom Paris and Lt. B'elanna Torres marrying each other, which turns out to be a happy moment for the crew... although they do not notice how the floors and the Jefferies tube below them are starting to ominously distort. (And wait, didn't Tom get demoted?) B'elanna and Seven of Nine soon find out, though, with Seven discovering that the distorting section of the ship is losing molecular cohesion and B'elanna saying that it's radiation from the warp core that's causing the demolecularization. Then B'elanna herself starts to develop signs of the same problem, as do a few other crew members who worked in Engineering. She eventually dies despite Tom Paris and the Doctor's best efforts to save her.

Realizing that things brought on board the ship over the past several months are immune to demolecularization, Commander Chakotay and Lt. Cmdr. Tuvok investigate the path of Voyager's journey and indicate one particular event — their landing on a Demon-class planet where they discovered the "silver blood" — that may be the cause of the problem. Through an injection of a dichromate catalyst into the corpse of B'elanna Torres, Chakotay and Tuvok get their answer — the whole ship as well as its crew are biomimetic copies of the original Voyager, and the warp core radiation, though harmless to humanoids, is killing them. Despite this, Captain Janeway orders her crew to continue on their journey to the Alpha Quadrant while they try to find another Demon-class planet where they could make repairs.

As the ship continues to lose molecular cohesion and the crew continues to die, Voyager does find another Demon-class planet, only to end up in an altercation with a mining treaty defense ship that wards them off with phaser fire. After getting into an argument with Chakotay which results in him dying from demolecularization, Janeway orders the ship to turn around and head home for the original Demon-class planet that they came from while sending out a distress call for the real Voyager.

The real ship draws near, but Ensign Kim, Seven of Nine and Neelix are the only main crew still living with most of the ship being held together by force fields; they are unable to hail the original ship or come out of warp. Ensign Kim orders the warp core to be dumped, which would drop them out of warp; it succeeds, but at the cost of the ship also disintegrating. By the time the real Voyager comes into contact with the ship's last known coordinates, they are too late — all that is left is just formless particles of debris from which no investigations can be made. At which point the real Captain Janeway records a brief note in the ship's log and tells Ensign Paris to resume course.