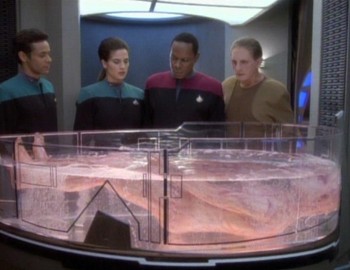 "So, who wants to be the first to tell Riker that killing his own clone is still murder?"
Advertisement:

An old enemy of Odo's is murdered behind locked doors, and all the evidence points to Odo as the killer. Meanwhile, Keiko plans to start a school onboard DS9, to give the children living there structure, as well as something to do.