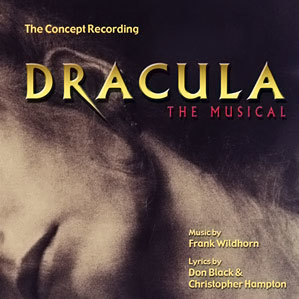 Adapted from the original Bram Stoker novel that the Public Domain Character Dracula comes from, Dracula is a musical scored by Frank Wildhorn, with a book written by Don Black and Christopher Hampton. The show had a tumultuous history: Its premiere at the La Jolla Playhouse, La Jolla, California, in 2001 was played to 115% capacity, the highest paid capacity for any world premiere production in the playhouse's history. It then premiered on Broadway in 2004, starring Tom Hewitt as the frightening vampire Count and Melissa Errico as the woman he loves, Mina Harker. Despite a brief nude scene and numerous spectacular effects, this engagement show ran for only 154 performances, and received mainly negative reviews. Today it is still held up right along with Tanz Der Vampire's ill-fated Broadway outing as proof that vampire-themed musicals don't work very well. However, the show was heavily revised and later had engagements in Europe, where it proved to be a hit. The Korean versions have been similarly successful.

Jonathan Harker, a young British solicitor about to be made partner, is sent out to Castle Dracula in Transylvania to see about a new client of his firm. Waiting at home for him is his young fiancée and secretary, Wilhelmina "Mina" Murray. Jonathan expects to be back home within a few weeks, but he doesn't know that Count Dracula is an ancient vampire, whose intentions in moving to England are nothing less than a plan to feast on the teeming crowds of London.

Meanwhile in England, Dr. John Seward, keeper of an insane asylum, notices a strange habit of his patient Renfield: consuming live things so as to absorb their life energy. Renfield keeps trying to escape to the old abandoned house next to the asylum, which seems to be seeing a lot of activity all of a sudden. And Lucy Westenra, Mina's beautiful best friend with one fiancé and two men in unrequited love with her (Dr. Seward being one of the two), is beginning to fall ill...

Concerned about Lucy's health, Dr. Seward notifies his Dutch mentor, Dr. Abraham van Helsing. When Van Helsing recognizes Lucy's illness as the mark of the vampire, he gathers Lucy's loved ones around him to save the girl: her fiancé Arthur, Lord Godalming; her American former suitor Quincey Morris; Jonathan Harker, and Mina. Together, hey form a plan to hunt him down and rid the world of him forever.