"To you, perceptive reader, I bequeath my history..." 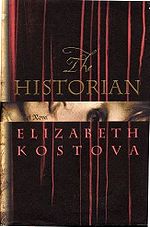 Oh, and it's long.
Advertisement:

Some vampires are parents. Some are homosexual. Others are friendly. Others are portrayed as those you see on television played by Bela Lugosi. (And then some are all of the above.) And then there are those vampires that manage to cause such a ''stir'' in some circles...

And then there are the real thing.

A story within a story, The Historian chronicles the adventure of a young nameless 16-year-old girl who finds an old vellum-bound book in her father's library. Upon hearing her father's explanation of the book, she learns about his travels to Istanbul and meeting Helen, his adviser's beautiful daughter. The narrator becomes increasingly interested in the story of Dracula.

But it doesn't end there.

The narrator's calm, peaceful life in Amsterdam is disrupted when her historian father has mysteriously disappeared, saying he's going to find her Missing Mom. Growing up with him, she loves history as much as he did, and doesn't believe a word of it. While she travels through the capitals of Europe to find him, she reads some letters of his that he's left behind, and slowly unravels the truth about her father's past, her missing mother, whom she had previously presumed dead, and her whereabouts.

But what does the legend of Vlad the Impaler have to do with anything? The answer to this, and the questions put up by her father's letters are found by the narrator as she travels from dusty libraries in Amsterdam to major cities all over Europe.

The Historian is Elizabeth Kostova's debut novel, published in 2005 when the world was in the middle of Twilight-mania. And thus some consider it to be the vampire book we all passed up.

As a reminder: this is not a horror novel. Not to be confused with the academic journal of the same name. Or any other historians, for that matter.