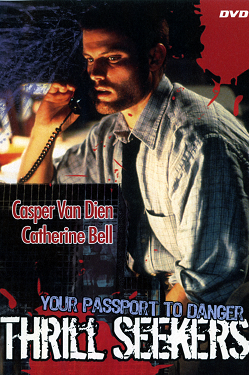 Thrill Seekers, also known as The Time Shifters, is a 1999 made-for-TV sci-fi movie.

Tom Merrick (Casper Van Dien) is a former news reporter who quit his job after several of his colleagues were killed in a collapsing power plant.

While researching catastrophes, he notices that the same man somehow appears in different photographs of these events for over a century...