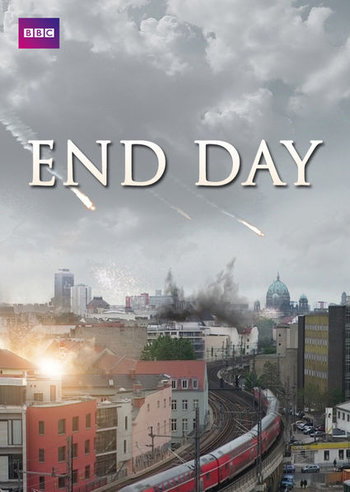 End Day (stylized as "End:Day") is a one-hour docudrama, directed and written by Gareth Edwards as his debut in both roles, and first aired in 2005 on BBC Three and later on, the National Geographic Channel. It briefly covers five (or four, depending on which version) "The End of the World as We Know It" scenarios of varying plausibility and severity, from a super-tsunami that wrecks the US East Coast and an asteroid impact that obliterates Berlin, through a vaguely bird-flu-esque global pandemic and a climate-wrecking eruption of the Yellowstone supervolcano, all the way up to a supercollider-created strangelet that eats the whole planet without stopping to chew. Each scenario is presented as a short dramatic segment, followed by brief clips (mostly cribbed from BBC Two's Horizon) of learned heads in various fields pontificating vaguely about the disaster we've just seen. It's all wrapped up in a frame story about a fellow who's just trying to get home from London.

, so you can enjoy it for yourself if you like. Surprisingly given its subject matter, it makes rather light viewing, probably because the segments are too short to cover their subjects in anything more than the most superficial detail.