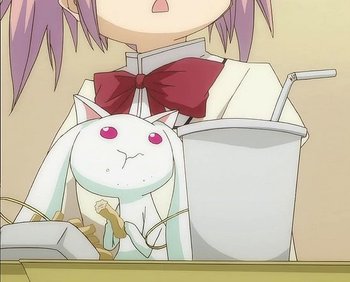 Oh, Grief Seeds are salty enough and the corpses of other Incubators are tasty and all, but sometimes you just need something deep-fried.
Even for a magical girl anime that's darker than all others, there are still a few laugh-out-loud moments.
Advertisement:

2 - That Would Be Truly Wonderful

4 - Miracles and Magic Are Real

7 - Can You Face Your True Feelings?