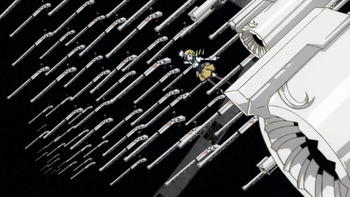 So many guns to count in this picture, but who really cares?
Puella Magi Madoka Magica is many parts tearjerking and horrific, but awesome moments are luckily one of them as well.
Advertisement:

open/close all folders
Episode 1 - As If I Met Her in My Dream...
Episode 2 - That Would Be Truly Wonderful
Episode 3 - I'm Not Afraid of Anything Anymore
Advertisement:
Episode 4 - Miracles and Magic Are Real
Episode 5 - There's No Way I'll Ever Regret It
Episode 6 - This Just Can't Be Right
Episode 7 - Can You Face Your True Feelings?
Episode 8 - I Was Stupid, So Stupid
Advertisement:
Episode 9 - I'd Never Let That Happen
Episode 10 - I Won't Rely on Anyone Anymore
Episode 11 - The Only Thing I Have Left to Guide Me
Episode 12 - My Very Best Friend