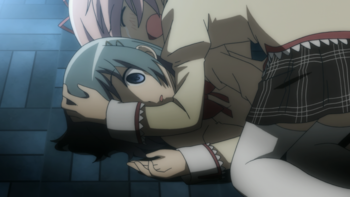 "What's wrong with you? Are you out of your mind? How could you throw your friend away like that?"
With a Magical Girl cast in a Cosmic Horror Story it is no surprise that Puella Magi Madoka Magica would have Tear Jerkers.
Advertisement:

As Moments subpages are Spoilers Off subpages and Madoka Magica is known to be gut-wrenching, all spoilers are unmarked and many spoilers abound in early episodes. You Have Been Warned.

open/close all folders
General
Episode 3 - I'm Not Afraid of Anything Anymore
Episode 4 - Miracles and Magic Are Real
Advertisement:
Episode 5 - There's No Way I'll Ever Regret It
Episode 6 - This Just Can't Be Right
Episode 7 - Can You Face Your True Feelings?
Episode 8 - I Was Stupid, So Stupid
Episode 9 - I'd Never Allow That to Happen
Advertisement:
Episode 10 - I Won't Rely on Anyone Anymore
Episode 11 - The Only Thing I Have Left to Guide Me
Episode 12 - My Very Best Friend
PSP Game
Other

You sound really bummed out there. But I can help you cheer up.
Just make a contract with me, and I can ease your pains forever.