Literature / Tennis Shoes Among The Nephites 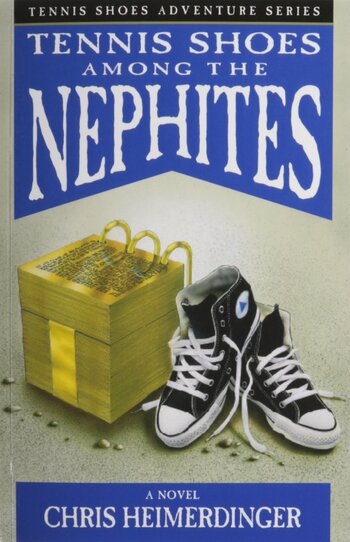 The first book of the Tennis Shoes Adventure Series.

Jim Hawkins has a bad attitude. What's more, he enjoys having a bad attitude about everything — especially about church. Garth Plimpton is a fanatic. He's spent so much time studying the scriptures and thick books on archeology that he can't carry on a normal conversation with other kids. That's why they consider him a nerd.

Through an unusual chain of events, these two opposites become fast friends. Following a faded Indian legend, Garth and Jim accidentally stumble upon a mysterious passageway hurling them into another world — an ancient American world.

Join Jim, Garth, and Jim's pesky little sister, Jennifer, as they journey in a land where the names Helaman, Teancum, and Captain Moroni are more than just words on a page. A world where danger and suspense are a way of life. . .

Tropes appearing in Tennis Shoes Among The Nephites: