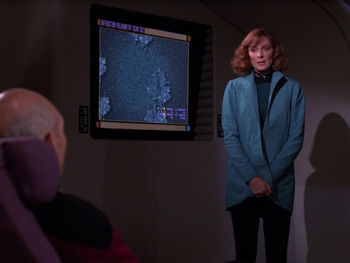 Ostensibly, this is about a science project gone wrong (of Wesley's doing, no less!) but we all know why this episode is really important - the return of Beverly Crusher and her glorious Jane Jetson hair!
Advertisement:

Wesley Crusher is fast asleep with his head on the counter where he's been working. He's been experimenting with some nanites, which are tiny robots that can do very delicate work due to their microscopic size. Unwittingly, he's left the container open and some of them have escaped. They proceed to infest the ship like pests, eating away at the circuitry in the computer and using those resources to reproduce themselves.

The Enterprise has come to witness a particular explosion at a binary star system that only occurs once every 196 years, having brought a Federation scientist named Dr. Stubbs (Ken Jenkins). When the ship starts to malfunction, Wesley discovers that it's the nanites that escaped that are causing the problems. Dr. Stubbs takes matters into his own hands, flooding the computer core with gamma radiation. This kills many of the nanites, but not all of them, and the remainder react by sabotaging the life support. This is quickly overridden, but after Dr. Stubbs is confined to quarters, the nanites find a way to attack him there with an electric shock.

Data offers himself for the nanites to use to communicate with Picard and the crew, and Picard reasons with them, explaining their dire situation if their computer is not repaired. The nanites agree to repair the computer, in time for Dr. Stubbs to gather data when the explosion occurs. Picard offers any assistance he can for the nanites, but they say they don't really need any. Other than transportation to a new home world, of course.