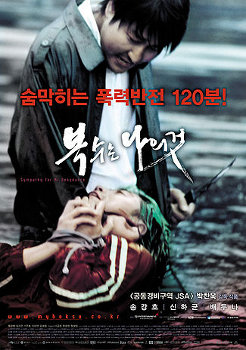 Sympathy For Mr. Vengeance (2002, Korean: 복수는 나의 것; Vengeance Is Mine) is a dark thriller directed by Park Chan Wook. It stars (Shin Ha-kyun) and (Song Kang-ho) as two strangers who become locked in a bitter and deadly feud. The film is the first installment of Park's Thematic Series on revenge, followed by Oldboy (2003) and Sympathy for Lady Vengeance.

Ryu, a deaf-mute aspiring artist, has to leave art school to take care of his ill sister, who badly needs a kidney transplant. Unfortunately he is laid off from his factory job, but he refuses to tell his sister. Out of desperation, he makes a deal with black market organ traffickers to find a kidney for his sister in exchange for one of his own kidneys and 10,000,000 Korean won. The organ dealers swindle him out of his money, leaving him unable to pay for his sister's operation (which cost exactly 10,000,000 Korean won) once her surgeon finally gets a kidney. Ryu and his girlfriend Cha Yeong-mi (Bae Doona) resort to a kidnapping scheme in order to get the money to save his sister. This benevolent crime begins a cycle of disaster and revenge that threatens to destroy everyone involved.