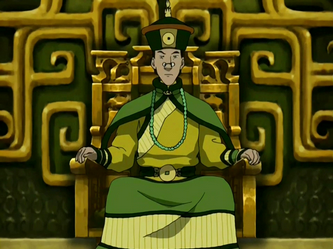 The Gaang finally gains an audience with the Earth King.
"I want to thank you, young heroes, for opening my eyes. All this time, what I thought was a great metropolis was merely a city of fools. And that makes me the king fool."

With the return of Appa completing the team at last, Sokka, encouraged by their new turn of good luck, suggests that they hurry to see the Earth King. Toph and Katara disagree, wanting to cut their losses and get out of Ba Sing Se while luck still seems on their side, but when Aang agrees with Sokka, Katara changes her mind, leaving Toph outvoted. After a massive battle, in which the team fights their way past the palace guards and into the throne room, they finally have their audience with the Earth King, only to find that Long Feng has beat them there. With the chancellor throwing doubt on their story, Team Avatar must convince the King that, not only has Long Feng been at the head of a conspiracy to control Ba Sing Se, but that the world is at war.

Elsewhere in the city, Zuko and Iroh return to their apartment, only for Zuko to fall deliriously ill. Iroh explains to him that Zuko's decision to set Appa free has left Zuko at war within himself.