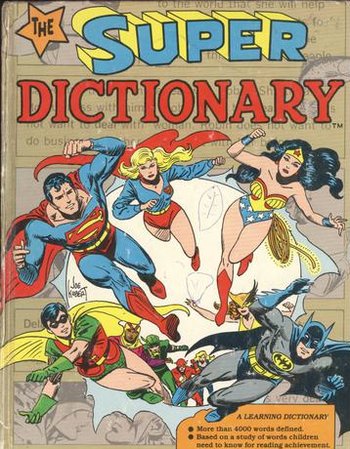 Teaching children grammar by Breaking the Fourth Wall.
"We all want our children to be excited by learning and gaining an early command of our language. This superb dictionary was carefully and systematically researched to accomplish just these things. Based on established educational methods, it contains all the words children need to know in the early grades. And it is so dynamic in design that children are highly motivated to use it. What could be more exciting than to have the greatest superheroes give meaning to a solid reading vocabulary."
—DR. MARIO FANTINI, Dean and Professor, School of Education, University of Massachusetts, Educational Consultant to THE SUPER DICTIONARY.
Advertisement:

The Super Dictionary is a children's dictionary. To be precise, a Warner Educational Services book, featuring superhero characters from DC Comics (including Batman, Superman, Green Lantern and Wonder Woman) as well as a few Canon Foreigners. It has the characters act out the words and their definitions, in often bizarre (and often quite out-of-character) ways. Developed specifically as Edutainment, it was marketed as "a convenient and entertaining resource book unlike any other."

Well, that last part was true...

As a side note, Craig McCracken, the creator of The Powerpuff Girls, has stated that Mojo Jojo, one of the villains from the show, was partly based on this book. Namely, his tendency to repeat himself in strange ways.

It was published in 1978 by Holt, Rinehart and Winston.

But let's be honest, you're just here for Lex Luthor stealing 40 cakes. And That's Terrible.

Not to be confused with Superdickery, although you can find a few examples of that in here.