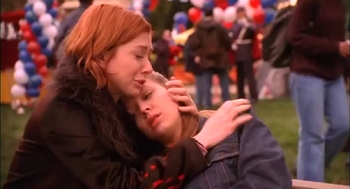 "Did anybody order an apocalypse?"
—Glory

Following recent events, Buffy has decided to drop out of college, notifying one of her professors about the decision. Although she regrets it, she feels that she has more important priorities at the moment. Ben finds himself fired from his job at the hospital because Glory has been monopolizing the human form they share, and he has been away from his job for two weeks. Glory takes a bath while she demands that her blindfolded minions tell her everything they know about the Key. Dawn and Buffy are called into Dawn's principal's office, where Dawn's poor grades are discussed, as well as the fact that Dawn has been skipping school since their mother's death. At the Magic Box, Anya talks about patriotism, equating it with capitalism and calling window shoppers "un-American."

Buffy seeks Giles's advice about being Dawn's mother figure, then takes her sister home, attempting an authoritative role with Dawn. Glory's minions provide her with enough information to conclude who the Key is, and Glory leads the way to gather it. Tara and Willow discuss their relationship and Willow's powers as a witch, but the discussion ends up angering Willow when Tara says, "it frightens me how powerful you are becoming," and then Willow accuses Tara of fearing that Willow's lesbianism is just an experimental phase.

Buffy talks with Dawn about how Dawn's situation needs to improve in school or Buffy could possibly lose guardianship of Dawn. Depressed over her first major fight with Willow, Tara goes to a cultural fair, but finds herself sitting next to Glory on a park bench. Giles finds one of Glory's minions at the shop and questions him about Glory's plans, and the minion reveals that, as Tara is the newest member of the group, Glory believes that she is the Key. Willow goes after Tara, who is in Glory's grasp, but can't get to Tara before it's too late. Glory discovers that Tara isn't the Key, and offers to let her go if she reveals the Key's identity. Protecting Dawn, Tara refuses, and Glory drains Tara's mind of sanity.

At the hospital, doctors look after Tara while Willow plans her vengeance against the evil god. Buffy arranges for Dawn to be kept safe by Spike in some underground caves while she takes care of the issues involving Tara. Buffy seemingly manages to convince Willow to abandon her revenge plans, telling her that attacking Glory would be potentially suicidal, but Willow goes to the magic shop to gather dangerous magic supplies in preparation for her attack on Glory.

Back at the caves, Spike (heavily bruised and limping as a result of Glory's torture of him in "Intervention") and Dawn talk. Dawn tearfully blames herself for all of the harm that Glory has caused to the citizens of Sunnydale (particularly Tara and Spike), and believes herself to be evil and a "lightning rod for pain," while Spike tries to comfort her and convince her otherwise.

Buffy soon joins them, believing that she has managed to convince Willow not to attack Glory; however, a skeptical Spike tells her that an angered witch, especially one as powerful as Willow, is not so easily reasoned with, and he would have done the same thing if Glory had done that to his loved one. Dawn then asks Buffy what she would have done if she (Dawn) had been the one to get drained. Buffy realizes that the two are right and Willow is going after Glory, and quickly leaves to stop her friend from being killed by the hell-god...

At Glory's place, Willow makes an unexpected, but grand appearance, casting spells wildly, all in attempts to attack and destroy Glory. Although she causes Glory some pain (something no one else, not even Buffy, has been able to do), she is quickly defeated. Even at Glory's mercy, Willow cannot resist spitting right in the god's face in a show of pure spite, which leads to her nearly being killed. Luckily, Buffy shows up in time to stop it. Buffy and Glory battle ferociously, until one of Willow's force fields allows Willow and Buffy to escape.

The next day, Willow, Tara, Buffy, and Dawn eat, with Willow and Dawn spoon-feeding applesauce to Tara, while discussing the responsibilities that Willow and Buffy have now to 'their' girls. Glory makes a surprise appearance, tearing out an entire wall. Tara, distressed, unwittingly reveals that Dawn is the Key.

So, what I think we have here is a failure for you to do your frickin' jobs!

Yeah, but not in a 'Miss Minchin's Select Seminary for Girls' way.