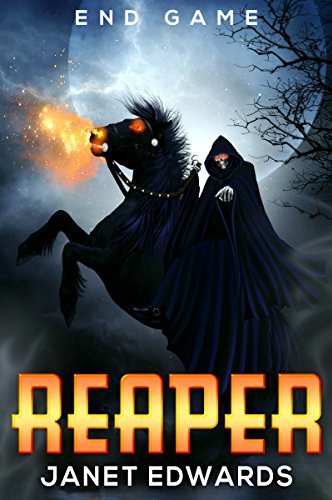 In the year 2519, people on Earth don't grow old and die any longer; their bodies are frozen and they start a new life in the virtual reality of the global Game.

Jex is almost eighteen, working twelve hour shifts, and dreaming of when she'll be legally adult and begin her long-planned idyllic life in one of hundreds of wildly differing virtual worlds. When a bomber attacks a server complex, one of the virtual worlds crashes, and eleven thousand immortal players die during emergency defrost. Death has struck for the first time in centuries, and Jex is questioned as a suspect in the bombing.

With this on her record, Jex will never be allowed to enter the global game, but then a 400-year-old legendary player offers her the chance to join his investigation into the bombing. Jex must help Hawk catch the true bomber to protect the global game and save her own future. She joins a chase that will lead through real and virtual worlds, but the bomber has good reason to call himself the Reaper, and the heroic Hawk has his own secrets to hide.

Reaper is a standalone novel by Janet Edwards, author of Earth Girl and Hive Mind (2016).