Literature / The Code of the Woosters 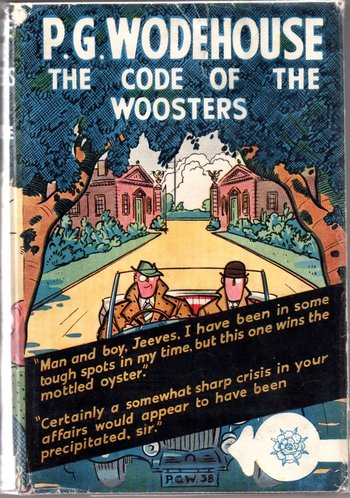 The Code of the Woosters is a 1938 comic novel by P. G. Wodehouse. It is the third novel to feature Wodehouse's most popular protagonists, Jeeves and Wooster.

Pleasant but dim-witted aristocrat Bertie Wooster has been summoned by three different people to go to Totleigh Towers, the home of Sir Watkyn Bassett. Bertie's similarly goofy young friend Gussie Fink-Nottle, asks Bertie to come to help Gussie patch things up with Gussie's fiancee, Madeline Bassett—Sir Watkyn's daughter. Bertie, who once blundered into an engagement with Madeline (in Right Ho, Jeeves) is only too eager to lend assistance, lest Madeline break up with Gussie and set her sights on Bertie again.

The second person at Totleigh Towers with a mission for Bertie is Stephanie "Stiffy" Byng, niece and ward of Sir Watkyn. Stiffy is in love with Harold "Stinker" Pinker, an old school chum of Bertie's, who has joined the Anglican priesthood and is curate to the local village. Sir Watkyn is reluctant to grant permission for his niece to marry a poorly paid minister, so Stiffy comes up with a harebrained scheme. Bertie will steal Sir Watkyn's antique silver cow-creamer, one of Sir Watkyn's most treasured possessions. Harold will catch Bertie, punch him in the nose, and retrieve the cow creamer, thus winning Sir Watkyn's respect.

The third person sending Bertie to Totleigh Towers is his Aunt Dahlia. Dahlia's husband Tom is also a collector of dinner ware and was going to buy that cow creamer before Sir Watkyn got it first. Dahlia also tells Bertie to steal the silver cow creamer, and give it to her, so she can give it to Tom and butter him up so he will continue financially supporting Dahlia's magazine, Milady's Boudoir.

Lurking about is Roderick Spode, a disturbingly large and ill-tempered man, friend to Sir Watkyn and an admirer of Madeline's who is deeply jealous of Gussie. And then there's Jeeves, the brilliant, hyper-competent valet, who wants his master Bertie to agree to go on an around-the-world cruise. When all of the above results in various wacky misunderstandings and romantic entanglements, everyone looks to Jeeves to save the day.