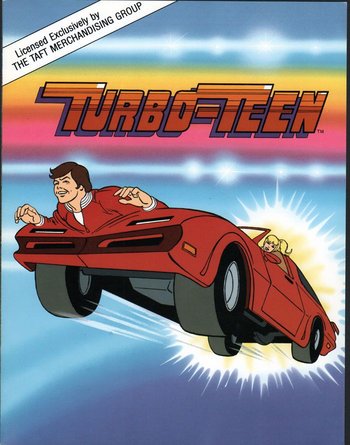 "I'm Bret Matthews. It was a stormy night when a bolt of lightning forced me off the road! My car skidded into a government laboratory where a top-secret experiment was under way! I swerved into the path of Dr. Chase's molecular-transfer ray, causing me and my car to become one! The incredible Turbo Teen!"
—Opening Narration
Advertisement:

Turbo Teen was an Animated Series created by Ruby-Spears that aired Saturday mornings on the ABC Network for twelve episodes between 1984 and 1985. The visual design was developed by comic book great, Jack Kirby. The series was once rerun on the USA Network's now-defunct USA Cartoon Express block.

The series is about a teenager named Brett Matthews, who swerves off a road during a thunderstorm and crashes into a secret government laboratory. There, he and his red sports car are accidentally exposed to a molecular beam invented by Dr. Chase and the two become fused together. As a result, Brett has the ability to morph into the car when exposed to extreme heat, and reverts back into his human form when exposed to extreme cold. With this ''amazing'' new super hero power, Brett and his friends (who call him "TT") go on crime fighting adventures and thwart evildoers. As a subplot, Brett constantly searches for a way to return back to normal with the help of the scientists responsible for this.

A reoccurring villain is the mysterious, unseen "Dark Rider", who drives a monster truck and seeks to capture TT to find the secret behind his abilities.

The concept of a person changing forms when the temperature changes isn't unheard of but this show predates Ranma ½ by several years. It was very likely influenced by Knight Rider, as the car looks a lot like the Pontiac Trans-Am used for KITT.