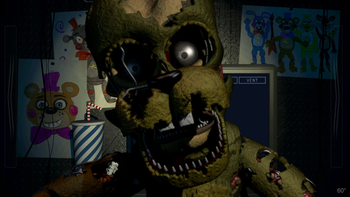 While 4 and Sister Location are often seen as the scariest of all the games, Pizzeria Simulator manages to outdo all five gamesnote or six that came before it — with frightening as ever mechanics, absolutely terrifying character designs that are out there even for this series, utterly chilling lore revelations that make the story darker than it ever was before, and the simple fact that it lays within a seemingly innocent facade that left the entirety of the fanbase fooled... as the Grand Finale to the games as a whole, Freddy Fazbear's Pizzeria Simulator pulls out as many stops as it can to make the series go out with a bang... and many screams.

That was easier than I thought it would be.